Our vision is to provide opportunities for neighbors to get together to improve our community. We would like to provide channels for improved communication among residents, and foster friendship and civic engagement. Whether you want to help plan a community garden, an art festival, or engage with government in shaping the future of our Village, a strong civic association is the vehicle for positive change.

Documents and Pictures for 75 Monroe

Judge Ark ordered the Village's Zoning Board of Appeals (ZBA) to hear an appeal of the Denial by the Architectural and Preservation Review Board (APRB).  The ZBA agreed with the decision of the APRB and found the scale of the project was too big.  The ZBA denial is August 17, 2015.  Their findings are an excellent read.
ZBA Denial Findings - September 15, 2015
ZBA Denial Minutes - August 17, 2015

The Architectural and Preservation Review Board (APRB) denied the project on December 14, 2014.  Their findings are an excellent read.  They found the building density of the project greatly exceeded that of any other sites in the village.  They had the same opinion in their advisory review way back in January, 2012.  The Trustees had essentially the same opinion on appropriate scale in June of 2011.  The developer continued with their application despite these opinions.

Architectural Drawings of the Project
APRB Findings for Denial
Meeting Minutes for Denial - December 14, 2014
APRB Findings For Denial - January
Architectural Review Board Report - January 4, 2012.
Trustee Minutes June 9, 2011 - The size of the project was too big.
Trustees Minutes June 22, 2011 - They agreed the size should be cut in half: 12-15 units per acre instead of the 25 units per acre proposed by the developer.

Final site plans were approved by the Planning Board in November 11, 2014.  These plans are significantly different than the layout approved by the Village Board of Trustees in 2012 (the "Regulating Plan").  Lawsuits were filed and the entire Planning Board resigned in May 2015 when the judge ruled that he would not dismiss the lawsuit.

Final Site Plan Approval Minutes - November 11, 2014.
Zoning Board Approval Minutes - October 29, 2014 for variances required for the project.
Site Layout Approved by the Trustees - The Regulating Plan
Site Layout Approved by the Planning Board - This is based on preliminary site plans, final site plans had some revisions.  You will notice there is a lot less room for trees because the buildings are larger.

Final Site Plan Addendum #3, Jan 2014 -  This is the complete submission to the Board and includes updated drawings and new text that describes changes.  No significant changes have been made to the site layout since their 2013 site plan submission.

Preliminary Site plans were approved by the Planning Board on July 10, 2013.  The plans differ from what was approved by the Village Board of Trustees (the "Regulating Plan") which started a large dispute between the Boards.  The Planning Board's attorney advised the board that they needed to approve plans that conform with those of the Trustees.  This approval resulted in an appeal and a successful lawsuit by the Developer to block the appeal.

Preliminary Site Plan Approval Minutes and Findings - July 10, 2013
Partial Transcript - From July 10, 2013 meeting that shows that the planning Board voted against the advice of their attorney.

The developer has submitted preliminary site plans for the 75 Monroe Development in June / July of 2013 that are significantly different than the layout approved by the Village Board of Trustees in 2012.

Approved regulating Plan 3-8-2012 - This was approved with the Special Use Permit in November of 2012.  The restaurant is along the canal in the bottom center of the image.  There are 7 apartment buildings in addition to the restaurant.

Letter from Developer; DRC Committee memo on new plans - The developer submitted a letter to the trustees requesting they review the new plans.  The DRC committee, consisting of members of all three Village boards, submitted a memo describing changes and some issues that need to be addressed.


Images of Apartment Buildings:
The size of buildings relative to Pittsford Main Street.  Note this is based on drawings submitted in March, 2013 which are different than the current drawings.  The building sizes are similar.
Building 1000
Building 2000
Building 3000
Building 4000
Building 5000 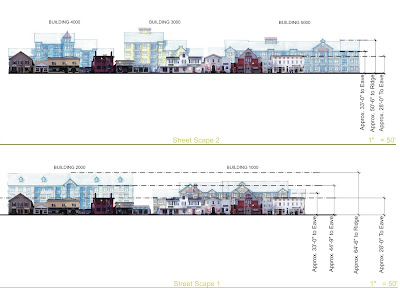 These documents are in the public record at the Village office.  Meeting minutes are available on the Pittsford Village web site.  There is a tremendous amount of documentation available, we are posting the most important documents as they become available.

Special Use Permit Resolution - This is the final text of the resolution passed by the Trustees.  This is the permit that authorizes 75 Monroe to be used for a 125 seat restaurant and 167 apartments.  It is NOT a building permit and does not authorize construction.  Many more permits are needed before construction can start.  A building permit will not be issued until the site is cleaned and final plans are passed by the Planning Board and the Architectural Review Board.

75 Monroe Traffic Study (2007) - Traffic study to 75 Monroe.  It does list several concerns including:

Monroe Ave. Traffic Report (2010) or HERE- Traffic report for Monroe Ave. through both the Town of Pittsford and the Village of Pittsford.  It includes traffic history and projections for the entire length including the conjested region around Wegmans.

R5 Zoning - This is the zoning laws that apply to 75 Monroe.

Architectural Review Board Report - Meeting minutes of the APRB January 2012 when they first voted that the 75 Monroe plans are NOT compatible with the scale and massing of the Village.  This came up again in December, 2014 and they denied it again with more substantial findings: APRB Findings for Denial

SHPO Report - Report from the NY State Historic Preservation Office (SHPO).  It does not look like they thoroughly review the project.  Their advise was to plant some trees.

APRB Consultant Report - Report from Crawford & Stearns, April 27, 2011.  This firm specializes in preservation architecture and their report covers the compatibility with the character of Pittsford Village.  They liked the version of plans better than previous plans and they liked the architectural style and orientation of buildings.  Their statements on building size were inconsistent: "the new buildings do not have a residential scale to the buildings" but they "establish compatibility with canal side areas of the Village."  The report focuses on architectural style and skirts the issue of the physical size being appropriate for the Village.  They did make the statement that the concept is "compatible with the historic character of the Village of Pittsford."

Timeline - This is the timeline for the 75 Monroe project.  This comes from the flyer mailed to residents by the Village.

DEC Cleanup Plan - This big document contains the details of the cleanup plan for 75 Monroe.  It covers lots of details even smaller things like cleaning your boots when leaving the site and procedures for cleaning trucks that leave the site before entering public roads.

DEC Draft RIW - This is a document from the DEC about the site cleanup.  It is mostly useful because it has the relevant DEC contacts that are in charge of this project.

Many of the images below are very large.  They may display poorly on your web browser.  To see the full size image click on the link and then use the File menu on the page and select Download.

We have disabled anonymous comments. Please login to add a comment. If you have a question you can email us with the form at the bottom of the page.

To receive new posts via email you just need to enter your email address in the Follow by Email box below.
If you want to email us, scroll to the bottom of this page and use the form to send us an email.
You can call us at 310-1925
Friends of Pittsford Village
PO Box 802
Pittsford, NY 14534